“The Warning” and Other Prophecies

Jesus is coming with a warning, also called a Great Illumination. I’ve been studying the prophecies about this — some of which were spoken long ago. Do today’s upheavals and rampant evil indicate that the prophecies are coming true?

By paying attention to our Blessed Mother’s warnings in her various apparitions of the past century and earlier, and after listening to holy priests and other mystics who have the gift of prophecy, we can conclude that a supernatural “illumination” is coming. That’s what is called “The Warning”.

To purge humankind from its very pervasive evils, God will send a flood like in the days of Noah, but this time it will be the flood of the Holy Spirit! God wants to purge the earth of its rampant sinfulness. He also wants to save as many souls as possible. Thanks to the many prayers of the faithful (the Divine Mercy Chaplet, for example), he is now giving lots of big clues about the need to prepare for an upcoming supernatural event.

God is going to make it known to everyone on the earth that Jesus is Lord and he the only way to Heaven, so that everyone can decide with eyes wide open whether to follow him or not. If this is true, it’s a very exciting time to be here!

In this episode of Footsteps to Heaven, we cover:

We start with the prophetic warning of Saint Pope John Paul II. Next I share with you the prophecies of the Catechism of the Catholic Church, the Blessed Mother in Garabandal (Spain), Fr. Michel Rodrigue, and St. Alphonsus de Liguori. And I summarize for you what I think the prophetic evidence is telling us, in the context of why faithful followers of Christ need not be frightened of the Warning.

Below you’ll find the texts quoted in this podcast.

This podcast is also available on video >>

You can download the transcript from the Paracletia web course >>

This podcast references the following resources:

1. My book Overcoming the Power of the Occult.

2. The story of my conversion (which includes the video of my testimony on how Jesus rescued me).

3. Saint Pope John Paul II: In 1976, two years before Saint John Paul II became Pope, he spoke at a Eucharistic Congress in Philadelphia. In his speech, he said:

We must be prepared to undergo great trials in the not-too-distant future, trials that will require us to be ready to give up even our lives, and a total gift of self to Christ and for Christ. Through your prayers and mine, it is possible to alleviate this tribulation, but it is no longer possible to avert it ….

How many times has the renewal of the Church been brought about in blood! It will not be different this time.”

4. The Catechism of the Catholic Church Paragraph #675
Before Christ’s second coming the Church must pass through a final trial that will shake the faith of many believers. The persecution that accompanies her pilgrimage on earth will unveil the “mystery of iniquity” in the form of a religious deception offering men an apparent solution to their problems at the price of apostasy from the truth. The supreme religious deception is that of the Antichrist, a pseudo-messianism by which man glorifies himself in place of God and of his Messiah come in the flesh.

CCC Paragraph #677
The Church will enter the glory of the kingdom only through this final Passover, when she will follow her Lord in his death and Resurrection. The kingdom will be fulfilled, then, not by a historic triumph of the Church through a progressive ascendancy, but only by God’s victory over the final unleashing of evil, which will cause his Bride to come down from heaven. God’s triumph over the revolt of evil will take the form of the Last Judgment after the final cosmic upheaval of this passing world.

5. Graciela Ramos, Assistant Director of Good News Ministries
Near the end of last year, I think it was November, the Lord showed us thousands of “black” bodies falling from high cliffs. Thousands of people were running directly to the cliffs. I was in a great pain, I felt anguished and told Fernando: “Oh, no. We have to do something!! There’s something terrible ahead of time and so many people are going to Hell!” I was desperate. Then I heard from the Lord: “Tell them to turn to Me. Tell them to turn away from their sins. The Book is open.”

In October of 1961, she revealed to Conchita the “Great Miracle”. Later, she also told the other three children. Conchita says that it will be a Thursday at 8:30 pm and will last 15 minutes. It will coincide with a great event in the Church. Sinners will convert and unbelievers will believe.

In order to prepare us for the Great Miracle, a supernatural warning, coming directly from God, will occur. The Warning will appear in the sky and will be visible to the whole world. It will be understood by everyone at the same time, regardless of their state of life or knowledge of God. It will be a terrible experience, but it will be for the well-being of our souls because we will see interiorly, in our conscience, the good and the evil we have done. God desires our salvation; the purpose of the Warning is not to cause us to fear but to bring us closer to Him and to increase our faith.

If the world does not change after the Miracle, a chastisement will come. Conchita says, “If we do not change, the Chastisement will be horrible. Loli, Jacinta and I have seen it, but I cannot say what it consists of, because I do not have Our Lady’s permission.”

On October 18th, 1961, the Blessed Virgin Mary gave the girls permission to announce the first message: “We must make many sacrifices, perform much penance, and visit the Blessed Sacrament frequently. But first, we must lead good lives. If we do not, a chastisement will befall us. The cup is already filling up, and if we do not change, a very great chastisement will come upon us.”

The second message of the Blessed Virgin Mary came on June 18th, 1965, only a few months before the end of the apparitions. Saint Michael was sent by the Blessed Virgin to impart the message to Conchita. As Saint Michael spoke, tears began to stream down Conchita’s face. “As my message of October 18th has not been fulfilled and has not been made known to the world, I tell you that this is my last message. Before, the cup was filling up. Now, it is overflowing. Many cardinals, many bishops, and many priests are on the road to perdition and are taking many souls with them. Less and less importance is being given to the Eucharist….”

For more on Mary’s apparitions in Garabandal, go to garabandal.it/en/…story-of-garabandal.

“My dear people of God, we are now passing a test. The great events of purification will begin this Fall. Be ready with the Rosary to disarm Satan and to protect our people. Make sure that you are in the state of grace by having made your general confession to a Catholic priest. The spiritual battle will begin. Remember these words: THE MONTH OF THE ROSARY WILL SEE GREAT THINGS!”

When the soul enters the kingdom of the blessed, and the barrier which hinders its sight is taken away, it will see openly and without a veil the infinite beauty of God; and this will be the joy of the blessed.

Every object that the soul then will see in God himself will overwhelm it with delight; it will see the rectitude of his judgments, the harmony of his regulations for every soul, all ordained to his divine glory, and its own good.

The soul will especially perceive, in respect to itself, the boundless love which God has entertained towards it in becoming man, and sacrificing his life upon the cross through love of it. Then will it know what an excess of goodness is comprehended in the mystery of the cross, in the sight of a God become a servant, and dying condemned upon an infamous tree; and in the mystery of the Eucharist, in the sight of a God beneath the species of bread, and made the food of his creatures.

In particular, the soul will perceive all the graces and favors shown to it, which, until then, had been hidden. It will see all the mercies he has bestowed on it, in waiting for it, and pardoning its ingratitude. It will see the many calls, and lights, and aids that have been granted to it in abundance. It will see that these tribulations, these infirmities, these losses of property or of kindred, which it counted punishments, were not really punishments, but loving arrangements of God for drawing it to the perfect love for him.

Here’s a related podcast you’ll find helpful: The Promise of Victory for Your Lost Loved Ones.

What do you think? Cancel reply

What are you seeking from God? Find it in 60 secs:

The Footsteps to Heaven podcast show, with your host Terry Modica, is brought to you by Good News Ministries of GNM.org.

Life’s a journey full of challenges. When we walk with Jesus in the power of the Holy Spirit to the destination that God the Father designed for us, the results are better than we could ask for or imagine.

The Footsteps to Heaven podcast show provides faith-builders based on what the founder and director of Good News Ministries, Terry Modica, has learned from her own journey and what people tell us they’re seeking in their daily struggles. It comes straight from her heart.

“I find your talks and ministry very practical, very Catholic, faithful to the Church, and best of all approachable, humble, and simple.” (Yvonne T)

“Thank you so much for this, Terry. I really learned a lot from the course on the Holy Spirit and I’m looking forward to more of these courses during the year!” (Crystal H)

“When I listen, all I want to do is soak in your practical words of advice and wisdom because I feel they are so very much on target and inspired by the Holy Spirit” (Beth S)

Your help is important

Do you believe more people should hear these podcasts? Please sponsor upcoming episodes. Go to gnm.org/…sponsorship. 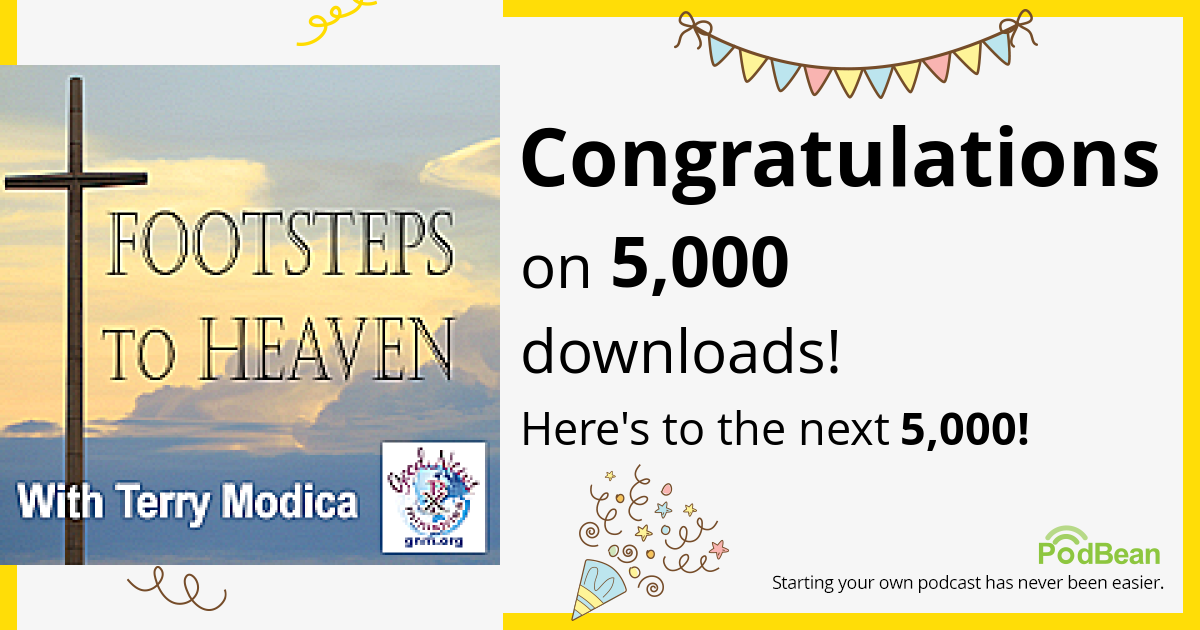